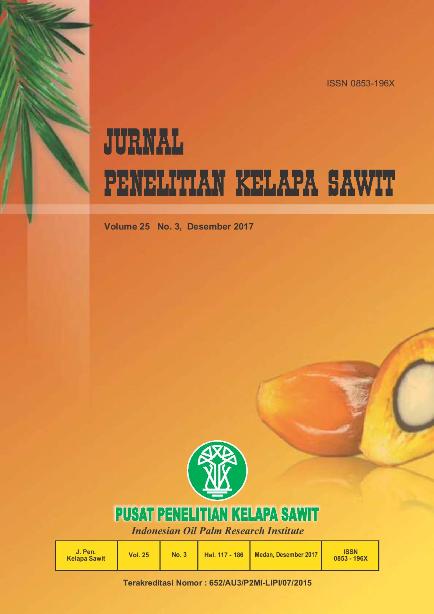 Oil palm requires evenly distributed rainfall throughout the year to achieve optimum yield. This study was aimed to estimate monthly oil palm yield based on depth of rainfall and rainy days data. Yield data were collected from 12 years old of oil palm grown on mineral soils at 15 plantations in North Sumatra. The yield data were monthly data of 2016 and 2017 for database and comparison, respectively. Data of depth of rainfall and rainy days were from 2012-2016. Data were analysed using linear and non-linear correlation between depth of rainfall versus yield and rainy days versus yield at time lag of 0, 6, 12, 18, 24, 30, 36, 42, and 48 months. The results of correlation analysis were used to construct an equation model for estimating monthly yield patterns. Based on values of Root Mean Square Error (RMSE), MeanAbsolute Bias Error (MABE), and Mean Absolute Percentage Error (MAPE) between estimation and actual monthly yield of 2017, it could be conluded that estimation model based on rainy days were more accurate than when it was based on depth of rainfall. The values of RMSE, MABE, MAPE of estimation model based on rainy days were 0,337; 0,275; 15,482%, respectively; while based on depth of rainfall the values were 0,367; 0,296; 16,594%, respectively.

This work is licensed under a Creative Commons Attribution-ShareAlike 4.0 International License.

Most read articles by the same author(s)